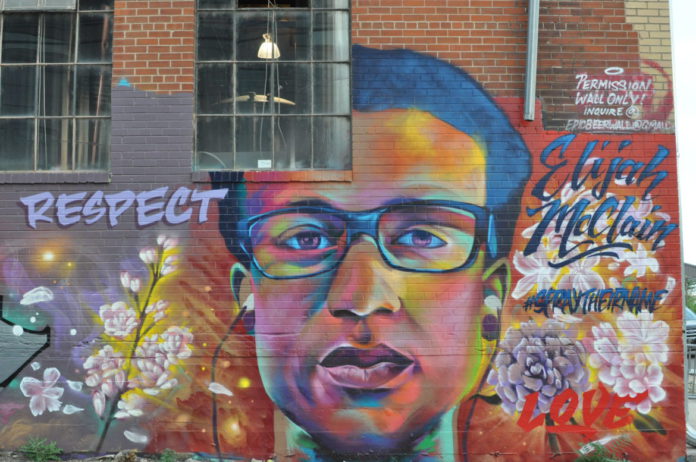 Independent investigators found Aurora police were not legally justified when they stopped, frisked and forcefully restrained Elijah McClain in August 2019, according to a report released Monday, and the city’s police and fire departments made critical errors leading up to McClain’s death. In addition to releasing their conclusions, investigators also made recommendations for best practices for responding to similar situations.

The investigation team was commissioned by the Aurora City Council last summer to review the actions of the Aurora Police Department and Aurora Fire Rescue on the night McClain was forcefully restrained by police and given a powerful dose of sedatives.

“The bottom line is: Elijah McClain should still be here today,” said Aurora Police Chief Vanessa Wilson at a news conference on Tuesday. “We will evolve, and we will become the police department that the community can trust,” Wilson added. “I know the trust is broken. And I know we have a long way to go.”

On Aug. 24, 2019, police stopped McClain blocks from his Aurora home while he was walking home from a convenience store. A passerby had reported McClain to police for “unusual behavior” because the young Black man was wearing a ski mask and making arm motions. Although McClain was not suspected of any crime, officers seized him and twice attempted to put him in a carotid hold, a technique meant to restrict blood flow to the brain to temporarily render someone unconscious. McClain was pinned to the ground, handcuffed and, after AFR paramedics arrived at the scene, sedated with a 500 mg dose of ketamine.

McClain suffered cardiac arrest while being transported from the scene and was pronounced brain-dead and taken off life support days later. An autopsy released in November 2019 by the coroner’s office for Adams and Broomfield counties declared McClain’s cause of death “undetermined.”

The investigators found that, based on available evidence, Aurora police were not legally justified in stopping McClain, patting him down or arresting him. They also questioned the officers’ use of force and decision to subject McClain to the carotid holds, noting that although the technique was allowed at the time under APD policy in situations where police reasonably feared for their safety, the record doesn’t show evidence of a perceived threat that would justify the use of the hold.

The officers’ body cameras fell off or stopped recording after McClain was pinned to the ground, the report states, and for nearly two minutes, there is only audio evidence from the encounter. “The body-worn camera audio, limited video, and Major Crime [Unit’s] interviews with the officers tell two contrasting stories,” the report states. While police statements on the scene and later interviews “suggest a violent and relentless struggle,” according to the investigators, the body cameras recorded McClain “crying out in pain, apologizing, explaining himself, and pleading with the officers.”

The investigators also concluded AFR “appears to have accepted the officers’ impression” that McClain was experiencing “excited delirium” without corroborating that assessment through “meaningful observation” or a diagnostic examination, the report says. Although AFR protocols permitted administration of ketamine for patients with symptoms of excited delirium, according to the report, the 500 mg dose McClain was given was “based on a grossly inaccurate and inflated estimate” of his size. AFR medic Peter Cichuniec estimated McClain weighed about 190 pounds when his actual weight was 140 pounds.

In addition to body camera recordings and police interview recordings, the investigators spoke to police and fire department leaders and reviewed McClain’s autopsy report, APD’s Major Crime Unit interviews and reports, and materials from an APD force review board, among other evidence.

The team was not able to review hospital medical records due to privacy concerns, nor could they interview any of the police officers or medical personnel who were at the scene due to other investigations and litigation.

There are multiple investigations and legal proceedings underway against the city, its police and fire departments and personnel in response to McClain’s death, including a criminal investigation by the Colorado Attorney General’s Office, a federal civil rights investigation, the state health department’s investigation into first responders’ use of ketamine to sedate people — a practice Aurora has temporarily banned — as well as civil rights and tort litigation.

The report includes recommendations for the city and its first responders, including a review of the APD’s use-of-force policy, training and supervision of officers. Wilson said the APD has already adopted some measures that address the investigation panel’s concerns. She said she felt the department’s force review board was “lacking” in its ability to investigate cases, and the APD has implemented a force investigations unit to “dig into the deeper questions” and talk to witnesses.

Wilson said she has also put into place a directive for handling suspicious person calls requiring police to use de-escalation techniques and for dispatchers to ask specific questions about why the caller thinks a person is suspicious.

The investigation team also recommended the APD, AFR, ambulance companies and other agencies implement a model to ensure proper transfer of a person from police control to emergency medical services.

During a Monday presentation to the Aurora City Council, Costello said there were delays in McClain’s transfer to EMS and “deference to the officers” during the process. During interviews with paramedics and Aurora Fire Chief Fernando Gray, “we came across this culture … that the patient isn’t a patient until the police say they are,” Costello said during the presentation. At Tuesday’s news conference, Gray said the APD and AFR will work together on revising department policies to define the process for transitioning care.

Although the city’s moratorium on administering ketamine was set to expire 30 days after the release of the report, Gray said, “we do not envision reimplementing ketamine into our system within the next 30 days.” Other measures taken by the AFR so far include new standards for weight estimates of patients and establishing an AFR diversity, equity and inclusion team to examine implicit bias.

According to the report, the investigation was limited to factual findings regarding the APD and AFR’s contact with McClain, a review of policies and procedures and recommendations for best practices. “Given that it was outside the mandate of this investigation to determine whether there were violations of law or policy or questions of civil liability,” the report states, “the Panel did not evaluate the information available in the context of standards of proof or admissibility of evidence in making any of our findings.”

Bar Associations Push for Equity in Wake of Scandal